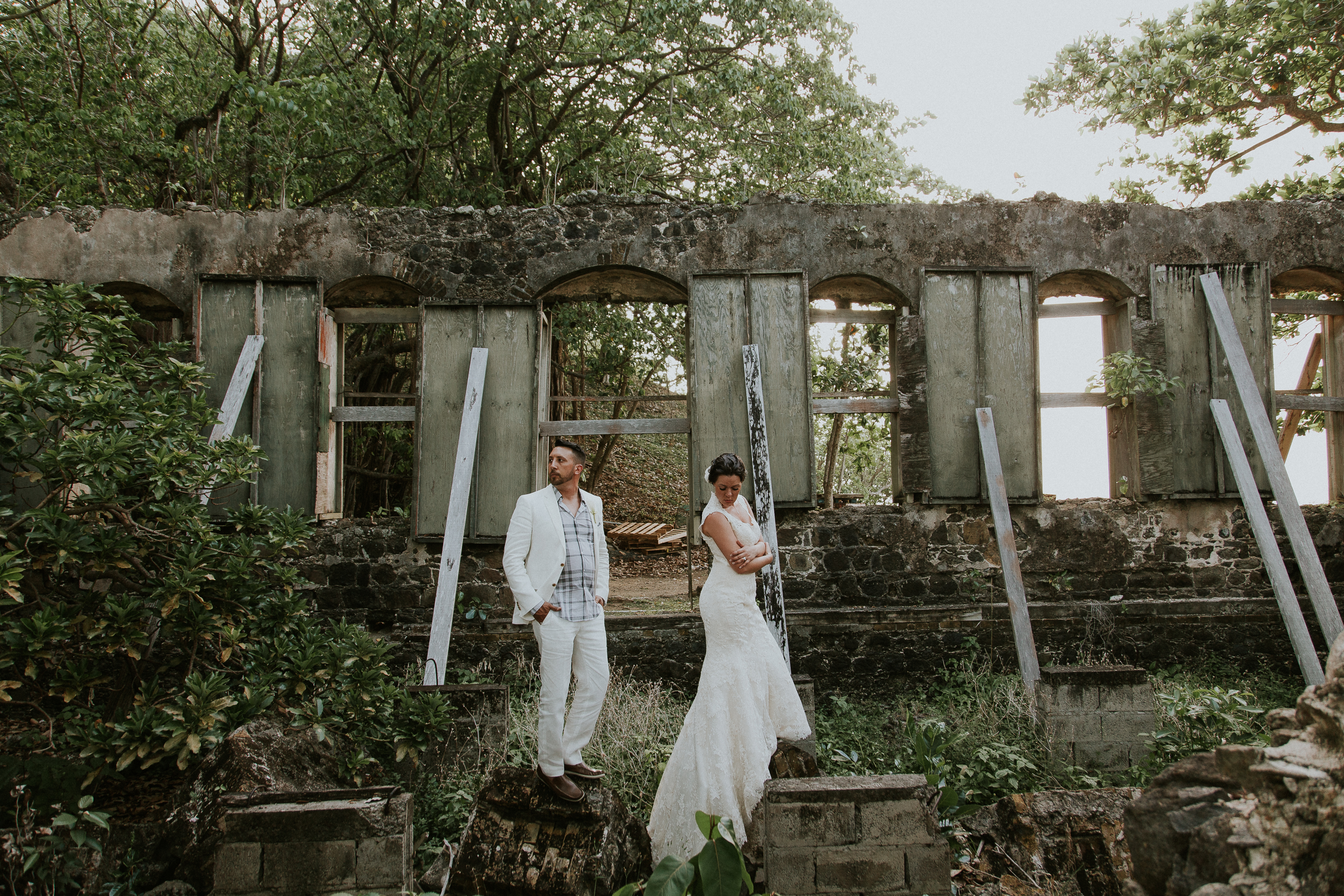 Kari and Leigh, thank you for giving me the pleasure of being your Sandals Grande St. Lucia Destination Wedding Photographer!

Would you cross an ocean for me? These two did just that. With over 24 hours worth of traveling to St. Lucia from Calgary, the couple boarded two planes, had a long layover, then took a shuttle through a rain forest full of twisted roads and a single lane highway that circles the island for an hour and a half, to the north side of St. Lucia to Sandals Grande in Castries, where their amazing Destination Wedding venue would be.

Before we knew it, with some minor jet lag, a few pina coladas, fun days full of water sports and beach time, it was the day before their wedding. I had done some googling for the last two months, since the couple asked me to photograph their wedding. A little pre-scout if you will. I found this amazing spot, only to find out it was about an hour drive both ways to and from the Grande.

I decided not to be defeated about my dreams of shooting in a rain forest with lush trees that covered the skyline and instead I went on more of a googling hunt and found ruins from the 18th-century. The ruins are old forts that the British used to spy on French ships. One of the ruins is up a steep hill where you have to climb up a pretty “safe” ladder (sarcasm).

The day before the wedding, we went to check out the park to make sure it was as good as I was hoping it would be – and also to make sure Kari could get around easily in her stunning dress.

My jaw dropped to the floor when I saw everything. As an avid abandoned buildings lover, I couldn’t have guessed how amazing this park was going to be. It was completely different from anything I have ever seen in Canada. It reminded me of the old buildings in England but way more dilapidated in the best possible way.

As we hiked around the park, we decided to ascend up the hill to check out what was at the top.

I always hold my excitement in for locations because really, when you’re wearing a wedding dress or say, a white Hugo Boss suit, you might not want to climb up a mountain and then stand on the ledge of the Fort Rodney ruins. But these two tho knew they wanted a super fun experience and amazing photos to look back at that were out of the norm, so they were completely game!

I met Kari in the hair salon as we giggled and chatted about the day, ate muffins, and sipped coffee. It was time for me to head over to meet Leigh in their villa. As I made my way over to him, it started to come down – like a torrential downpour. We had never chatted about a back up plan if it rained as the forecast didn’t call for rain. I was interested to see what he was going to say. He laughed it off and we all crossed our fingers it would blow through pretty quickly as rain does in tropical places. Within a half hour the rain was gone and the bright sun was out drying up the beach.

Kari arrived looking absolutely stunning as she slipped into her dress. Her mom did up the tiny buttons that adorned her back from the top all the way down. A knock at the door and it was game time!

As they walked under a huge palm tree to the beach, a white linen swayed in the wind covering a bamboo arch set in the sand. Sweet melodies were played as Kari’s hand met Leigh’s. The two laughed, cried, and laughed some more as the ceremony went on. Their vows were genuine & heart felt. The couple kissed and walked down the aisle into their first dance. They snuggled and swayed to the music. Their closest family looked on as the couple had their first dance as husband and wife.

Cocktails were sipped and cupcakes were cut. Before I knew it, it was time to head to the ruins for photos of the couple. Walking down the hallways with air-conditioning, the couple shared sweet stories while walking hand in hand. Just before arriving at the park we were greeted by a local making crickets and flowers out of long blades of grass. A true talent. We then met the park’s local cat sitting in the entrance way.

Lucky for us, it was about 5-10 degrees cooler the day of their wedding, so hiking along the paths and up the hills wasn’t as hard as we had expected it to be.

We made it to the top of the mountain just in time for sunset. The foggy skies gave off a dewy lighting as the two snuggled on the ledge for a few shots before we descended.

A table on the beach set with a beautiful arrangement and tiny flowers floating on water in little wood cups set the stage for their beautiful reception dinner under the stars.

Over 48 hours of traveling to and from St. Lucia couldn’t have been more worth it to be part of such an amazing day.

Thank you so much Kari & Leigh. You are both are super rad adventurers and it was such a wonderful experience to photograph your intimate wedding.

Contact me to book your destination wedding photography here.

From the Bride & Groom:
Wedding theme and colours // We wanted an organic, serene feeling. Our colours were beige, brown and green
Number of wedding guests: 5
Vibe // We wanted something honest and real. Nothing flashy, commercial or too composed
Your top 3 best moments and why:

This is hard to narrow down.
Seeing each other for the first time, the beach, the flowers, it was all amazing.

After signing the marriage licence, knowing we were finally husband and wife and making that commitment to each other in front of our family. Exchanging vows, saying and hearing the honesty and sincere love we have for each other.

Wedding song // Wanted. Covered by Boyce Avenue. It was perfect, we both agreed instantly.
Anything you would like to add // If we could had a fourth favourite moment, it would be the photo session. It was so much fun wondering through Pigeon Island National Park with Sarah. It was an afternoon full of laughs. We knew the photos would be great.

BEFORE THE WEDDING DAY
How did you meet? // We were both in College. I started working at The Red Onion as a cocktail waitress and he was the bar manager. We don’t have any type of love at first sight story. Our relationship started has a friendship over a few glasses of wine at the end of each shift.

Engagement story // Leigh had always said he would never propose on my birthday, at Christmas, Valentines day or on vacation because it was “unoriginal and cliche”. We had decided to go on a vacation to Greneda in the carribean and I had no idea that he had spent the previous few weeks ring shopping. About our third day there, the resort was holding a staff talent show. I was amazed at the level of talent some of the staff had and he offered to go and grab our camera from the room. As I’m sitting there, they introduce the final performance of the evening. The final performer was Leigh with mic in hand walking out on the stage. I couldn’t tell you what he said in that moment, but he proposed on stage in front of everyone at the resort. I was blown away.