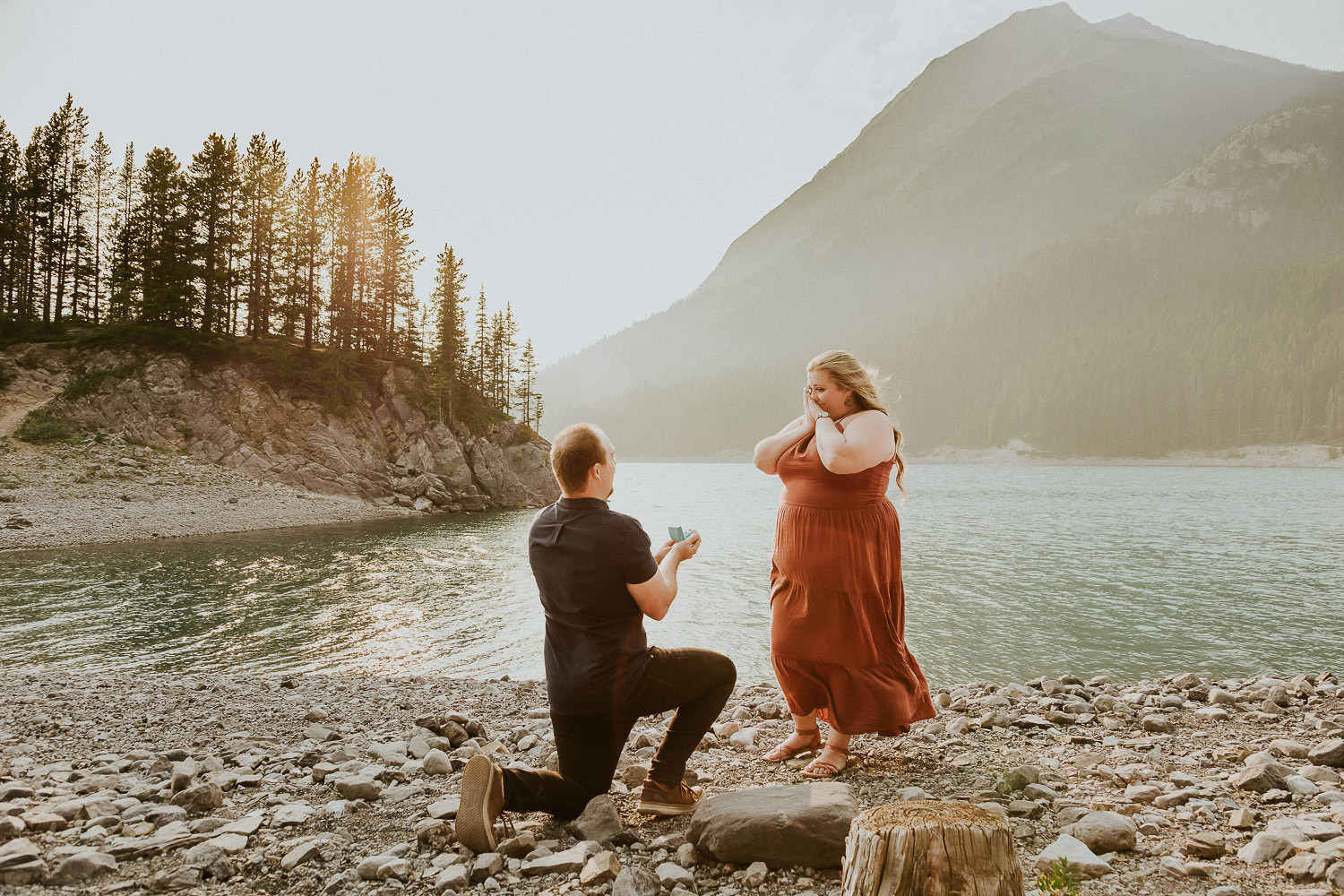 I love how many people are reaching out for a Banff Proposal Photographer these days!

Its truly one of the most stunning places to propose and to have photos to document the moment is a dream.
When Sim first reached out to me it was for their Couples Anniversary photos. Little did Amanda know that Sim had a plan.
Sim and I chatted about the different ways he could propose during their couples photo shoot in Kananaskis. In the end he decided to give me a little thumbs up when he was ready and once I found a scenic spot that you could actually see the mountains (they were pretty smoky from the B.C. forest fires this summer).
I posed Amanda in front of Sim looking towards the mountains with her back towards me – I gave her a couple of posing prompts while Sim grabbed the ring from their hiking bag. Sneeky Sneeky!
Than I had her turn around for another pose – and BAM there was Sim down on his knee like a champ!
She cried, He cried, I cried. There was just a lot of crying.
I couldn’t be happier to be able to document such an amazing moment for them both!
After the proposal their Couples Photos now turned into Engagement Photos as we shot along the shore line and in the trees before finishing off their session on the side of a Mountain.
Thinking about Proposing and need a Surprise Proposal Photographer in Calgary, Banff, Canmore, Lake Louise, Kananaksis or other? Well reach out and lets chat about your plans and create some memories! Contact.
Now, because I love intimate details here is a little from Amanda and Sim on their story! AND their super cute photos by moi – Banff Proposal Photographer extraordinaire!

From Amanda and Sim

How did you meet?

We were high school sweethearts. We met when we were just 15 and 16 yrs old and we had a mutual friend who introduced us to each other in the school hallway by Amanda’s locker. I made her laugh and smile a lot. When the school bell rang and Sim started to walk to his class and I was walking away to mine, I told my friend that I don’t know how or when, but that boy was going to mine one day, then he had a house party he invited me to where we really got to know each other and the rest is history!

Amanda //
Sim FINALLY asked me. We were coming up on our 8th year anniversary of being together and I said to Sim that I wanted to do something really special for it because 8 years is a long time to be together with someone, and not a lot of people can say they’ve been in a relationship for that long.
That’s when he suggested that we should do an anniversary photo shoot and I agreed. Little did I know that he was planning for it to be a surprise Proposal and Engagement photo shoot! He had all of his bases covered, messaged my Boss asking if I could have the day off from work, gave me a full day of pampering and self care with getting my hair and nails done before the photo shoot. It was one of the best anniversary gifts a girl could ask for!
Sim//
I wanted that day to be perfect for her because she deserves it. I wanted to make sure that she was feeling her best because nothing makes me happier than when she is feeling her best and is feeling sexy and confident.

Were you surprised when he got down on one knee?

Very much so! When Sarah asked me to turn around, that’s when Sim was down on one knee, holding this little blue velvet box open with the most beautiful ring I’ve ever seen inside. I was starstruck and filled with so much emotion that it took my breath away. I couldn’t believe that it was actually happening to me. I was in such a state of pure euphoria that I started to cry.
That’s when he told me how much he loved me and that even though this has been years in the making, that he wants nothing but to spend all of eternity with me, if I wanted to spend the rest of my life with him and do him the honour of being his Wife, I obviously said yes!

What was your favourite thing about one another?

Sim //
Her booty, and that she has these emerald green eyes that I can just stare and gaze at forever. She has this laugh that is so contagious that it lights up your entire day. She is kind and caring and has the biggest heart made of gold that she constantly wears on her sleeve, and that she has this unconditional love and passion for children and life itself.
Amanda //
He’s funny, like really funny. Then when he laughs he has the best smile that is so warm and inviting. He’s kind, patient and understanding. His eyes are so captivating that when I catch him staring at me, I get butterflies. He gives the best hugs in the entire world so that when I’m in his arms I feel safe and content, also his arm muscles are a nice bonus ;)

What was your favourite part from your photoshoot with Kananaskis and Banff Proposal Photographer Sarah Pukin?

Sim //
I would say the whole thing. Each moment was my favorite. From getting to meet Sarah and planning this whole thing out, to just being in that moment of pulling out the ring, getting down on one knee, and the feeling of anticipation and nervousness when Amanda turned around. It was an experience, a memory and a feeling that will be one of the best ones yet.
Amanda //
The entire day was amazing in itself, but I have to say that moment when I turned around and he asked me to marry him. It’s going to be a memory that will be one of my favorites for a long time to come, and if I could, I would relive that moment everyday for the rest of my life. Even now, I still get emotional just thinking about it.

Did you feel the location was wicked for your shoot?

Absolutely! It was a pretty smokey day, but add that with the sun setting it was made for picture perfect moments.

What are you most excited and looking forward to for your wedding day?

We’re excited to spend the rest of our lives with each other and to start this new adventure in our lives as Husband and Wife, and to have this Wedding a Wedding to remember. We love to host parties and this is not just going to be another party, this is going to be THE party that everyone will talk about for years to come!

If you could own a dinosaur as a pet what one would you choose?

Sim’s Answer: Pterodactyl, so I can fly and ride him and take my future Wife on cute dinosaur dates.
Amanda’s Answer: Probably a Triceratops because they just seem like gentle giants, and would make a great companion and cuddle buddy. Basically I think they’re the Golden Retrievers of dinosaurs.

Coffee, tea, or other.

Sim’s Answer: Coffee, because it’s the golden juice of life that comes from a little bean, and that’s pretty awesome.
Amanda’s Answer: Tea (Earl Grey), because anything you do is always better with tea. Reading a good book, crisp Autumn mornings or just winding down watching Netflix and relaxing. Tea is always the answer, plus coffee gives me heartburn.

Sarah is amazing! She made us feel so comfortable and free with this being our first photo shoot we’ve ever done. We were quite nervous as a couple at first but she made you feel so relaxed it’s like she wasn’t even there. She’s funny, and so down to earth that within seconds of talking to her and getting to know her, it feels as if you were lifelong friends with her. She’s professional and fun, and she made this an experience of a lifetime, one that we will never forget!

What he wore: Shirt was from Ralph Lauren, black jeans were from American  Eagle, and shoes were Steve Madden.
What she wore: Dress was from Old Navy, and the sandals were from Torrid. Earrings were from 10 Thousand Villages and the watch was from Fossil.
Ring, who made that bad boy: Evermore, Modern Gents.
Hair: Acacia Smith at Maddison Ave Salon.
Makeup: Done by the Bride to be herself!

What a way to start the 2023 Wedding season! Liz a

Can 2023 have more confetti please? #malcolmwedd